HRH The Countess of Wessex has been helping celebrate Swansea as a Queen's Green Canopy "Champion City" during a Royal Visit to the city on Wednesday 9th March.

To mark the occasion, Her Royal Highness planted a Jubilee tree at the city’s new coastal park, which is next door to the newly opened Swansea Arena.

The Countess toured the park, which is the first new urban park in Swansea for a century. HRH The Countess of Wessex also met VIPs, local groups and school children who are green champions in their communities, planting trees and promoting environmental initiatives in their areas.

Swansea has been recognised as a Queen’s Green Canopy “Champion City” as a result of ongoing work to plant thousands of trees across the city, and also to recognise the Council’s future plans to plant even more trees. Tree planting has taken place as part of recent new school developments, major improvements to council housing stock and also during the development of new walking and cycling routes.

Rob Stewart, Leader of Swansea Council said Swansea was privileged and honoured to be a Queen’s Green Canopy “Champion City”, which is both a celebration of the city’s commitment to its local environment and a challenge to do more in the years ahead.

He said: “We are very proud to be designated a Queen’s Green Canopy Champion city. It is a huge honour. We’re delighted that HRH The Countess of Wessex joined us at a significant time for the future of our city and during Her Majesty The Queen’s Platinum Jubilee Year.

The coastal park has only just been completed and the tree The Countess plants will be the final finishing touch for an innovative new destination that will be enjoyed for generations to come by countless visitors.”Being designated a Queen’s Green Canopy “Champion City” gives Swansea a special responsibility to make sure the legacy we hand over to future generations is a greener, happier and healthier city.

We’ve already established strong links with community groups and schools across Swansea to ensure there is a joint effort aiming to make that ambition a reality. This year we have plans to plant almost 1,000 trees and 5,600 whips trees. We’re also starting a major environmental mapping exercise to identify public land and roadside verges that would benefit from tree planting initiatives.

“It’s a way of putting down green markers now that will boost growth of green space in the years ahead.” 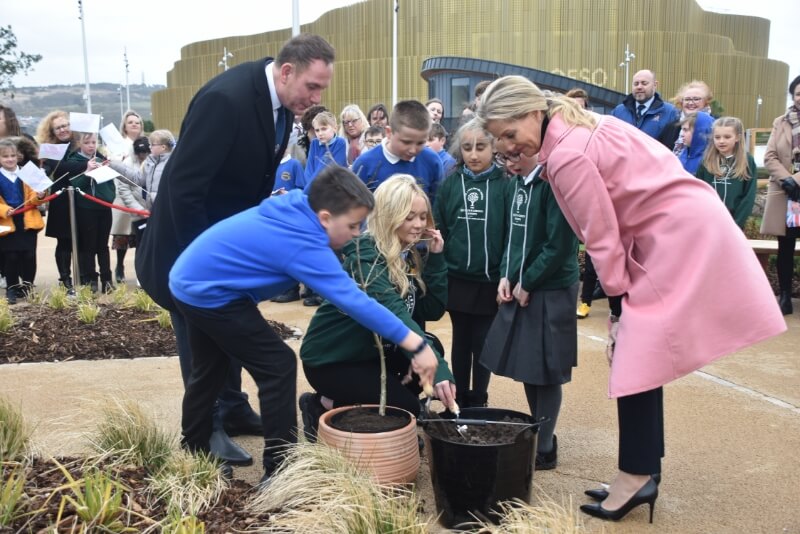