Next Steps Being Taken In £1 Billion Regeneration Of Swansea

The £1 billion transformation of Swansea city centre will take a major step forward this month with main construction work on one of the regeneration’s flagship developments, ‘Swansea Central’, starting onsite on 27 November. An integral part of the ambitious city-wide regeneration, the £135 million ‘Swansea Central’ phase one scheme is a new cultural district encompassing a 3,500-capacity live performance arena and conference centre, a 150-room hotel, a coastal park, striking pedestrian bridge, new homes, offices and food and beverage space, allowing the city to realise its potential to become one of the most exciting places in the UK to live, work, visit and study.

‘Swansea Central’ phase one is being delivered by Swansea City Council and developed by RivingtonHark, the leading city and town centre real estate transformation specialist. It is being funded by Swansea Council, with the arena feature of the development being part-funded by the Swansea Bay City Deal, a £1.3 billion investment fund set-up for major transformation projects in this region of South Wales. Phase one is due to complete in mid 2021 and will be anchored by the multi-functional arena and conference centre, operated by the global leader in live theatre, The Ambassador Theatre Group (ATG). The venue aims to stage 160 performances a year across comedy, theatre, live music and gaming, attracting over 230,000 visitors per year to the city and positioning Swansea as a desirable destination for both leisure and business. 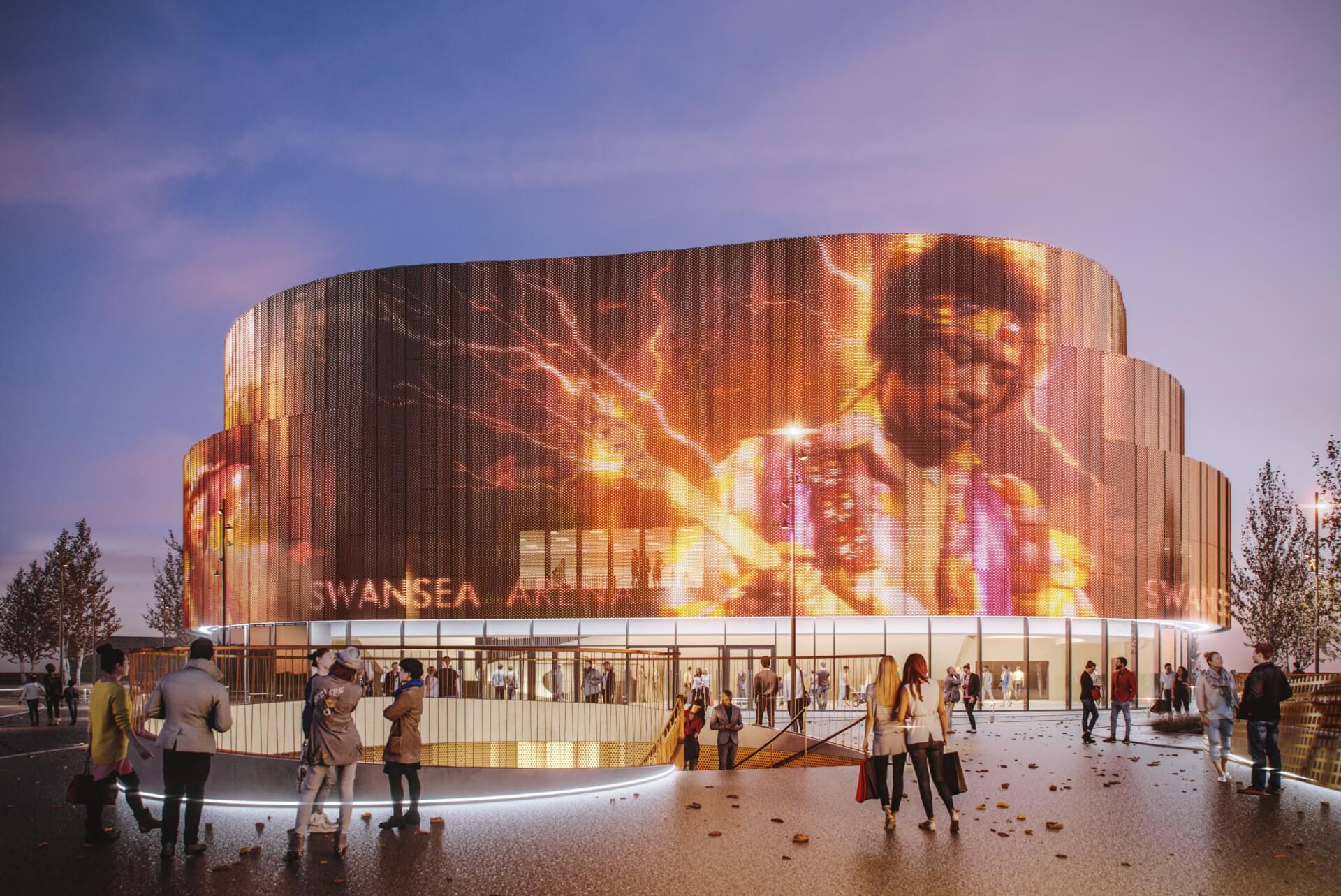 In addition, phase one also includes a green wall and the 1.1-acre coastal park, providing attractive green spaces as well as facilities for outdoor events, plus the hotel and 960 new parking spaces across the development. Adjacent to Swansea’s picturesque Marina, the ‘Swansea Central’ scheme will take the next steps to connect the city to the spectacular beach with the help of a statement bridge for pedestrians and cyclists, which combines improved permeability with eye-catching design.

Phase two of the ‘Swansea Central’ transformation is also under-way with an update to the design feasibility being undertaken. It will include further new homes, new office space, retail and leisure space along with additional public realm.

Swansea Central is a missing piece of the jigsaw that will attract more people to the city centre, and greatly strengthen our economic buoyancy.​

Rob Stewart, Leader of Swansea Council, commented: “The start on site of ‘Swansea Central’ marks a huge step in the major evolution of Swansea. From our spectacular beach and historical landmarks, to our world-leading universities and institutions, Swansea provides a wealth of opportunity that has been undervalued for too long. Alongside the other transformative projects taking place across the city, ‘Swansea Central’ is a missing piece of the jigsaw that will attract more people to the city centre, and greatly strengthen our economic buoyancy. The ‘Swansea Central’ phase one scheme alone is forecast to create over 2,500 new jobs throughout and beyond construction, of which 75 per cent are expected to be filled by local residents. Phase two will also see the creation of a large public sector hub, with the potential to create thousands more jobs in the city centre.”

The wider Swansea City Centre Regeneration Programme will bring further new housing into the city, as well as facilities for learning and business. The Swansea Bay City Deal will also part-fund a new commercial district, featuring a 100,000 sq ft innovation hub with incubation and co-working spaces for small businesses in the tech and creative industries, and a new ‘box village’ and innovation precinct due to be constructed at the University of Wales Trinity Saint David SA1. This will provide world class, flexible and affordable space for start-ups and students, supporting the retention of post-graduates in the city. Upon completion, these projects will collectively generate an additional £6.6 million household spend per year and £297 million GVA into the local economy.

Swansea Central will not only be a destination for world-class entertainment, but also a new urban neighbourhood for people.​

Mark Williams, Executive Director of RivingtonHark, said: “More than ever, city centres need local authority intervention in order to thrive, and Swansea is a positive example of what can be achieved with a forward-thinking local council at the helm. ‘Swansea Central’ will not only be a destination for world-class entertainment, but also a new urban neighbourhood for people. It marries uncompromising architecture and design with facilities that will draw people and business into the city, supporting the city’s ambitions to be a leading business and leisure destination.”

Planning permission for ‘Swansea Central’ phase one was granted in October 2018; main works start onsite on 27 November 2019 with a planned completion of phase one in mid 2021.